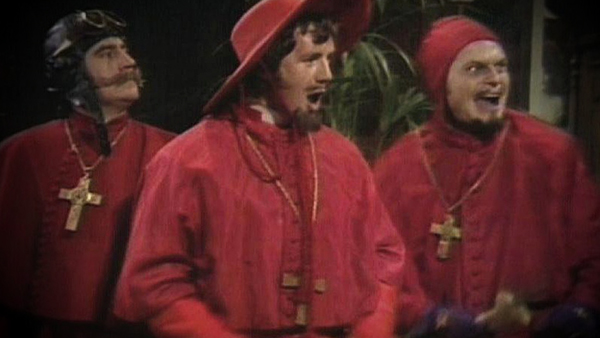 Bank Stocks and the Spanish Inquisition

As discussed in previous blogs the two key issues for share investors (particularly if in retirement) are to have a share portfolio that is likely to generate increasing income over time and to, as far as is realistically possible, minimise the downside risk of permanent loss of capital. To achieve this, the focus should be on stocks that as businesses are high quality, have favourable longer term prospects and are bought at a not overvalued price.

Banks are a cornerstone of many portfolios both individual and institutional. The big four ANZ, CBA, NAB and Westpac represent 25% of the ASX200 index. So if you have an index fund or an exchange-traded fund or a managed fund (including superannuation) that mirrors the Australian sharemarket you have close to one quarter of your share funds in banks. They are the 210 pound sand kicking brutes of the Australian market. So how do the banks today stack up against the above criteria? Particularly in the current environment of the lowest interest rates since at least the 1700s (not a typo). We are indeed living in historic times financially with many nascent longer term risks. Banks used to work on the 3-4-5 system which is borrow at 3%, lend at 4% and be on the golf course by 5. However those days are gone and the profitability of the big banks is coming under increasing pressure. The headwinds are now numerous.

It’s useful to look at the main drivers of bank profits and compare what was happening with these drivers in the 1990s and the 2000s with what is happening now. The 1990s and 2000s were the golden age for the banks when profits, dividends and share prices seemed to increase remorselessly (and bank executive salaries along with it). At the end of the day, the banks need to make profits in order to pay dividends, so the longer term outlook for bank profits is critical when assessing whether bank dividends are likely to increase, be flat or fall (as has already happened with ANZ).

The net interest margin is the difference between the interest rate received by the bank for a mortgage or other loan and the interest rate paid by the bank for the capital to fund the loan. Sustained low interest rates are negative for the banks because it makes it more and more difficult to pass on RBA interest rate reductions. Already 35% to 40% of the banks’ funding comes from at call and other accounts that pay virtually no interest. Regardless of what the RBA does you can’t reduce your interest cost below 0% (unless of course you are a debt riddled government to which institutions will lend at negative rates of interest) so the ability of banks to maintain their net interest margins if interest rates fall further is becoming more difficult. Also coming in 2018 are further regulatory changes called the minimum net stable funding requirement ratios (what a mouthful) which limits the banks’ use of shorter term (cheaper) wholesale funding. And increased use of mortgage brokers is increasing competition putting further pressure on net interest margins.

Loan growth is likely to be challenged with Australians already having high levels of debt by historical standards. Historically loan growth has been stimulated by falling interest rates. At some point, interest rates will start increasing again. RBA data shows that credit growth peaked above 14% in 2007 (no wonder those profits and dividends were smoking then) and is currently about 6%.

With regard to costs, the banks are already pretty efficient here. While this is good, it limits the extent to which costs can be further reduced.

In more recent years falling levels of bad debts increased bank profits. It appears that these have now stopped falling. If there is a recession or major grief in the residential property market, bad debts could rapidly escalate slashing profits.

What many bank shareholders are probably unaware of is that under the capital adequacy rules if bank capital reserves fall (would probably only happen if bad debts increase significantly) below certain levels there are new automatic restrictions imposed by APRA on what percentage of profit can be paid as a dividend ranging from 100% right down to 0% (this includes income securities as well). There is an excellent article by Chris Joye in the Australian Financial Review on 9 September 2016 about this. In this type of scenario, the banks are able to continue to pay interest on term deposits.

The banks themselves recognize that the risks are increasing by tightening lending criteria. Reported in the Australian Financial Review on 22 October 2016 was the news that NAB has just compiled a confidential blacklist of more than 600 towns and suburbs where a 30% deposit rather than 20% will now be needed. NAB clearly doesn’t have the confidence that property prices are going to keep on marching higher for ever and a day.

Bank profits are also coming under increasing political pressure with Senate enquiries and calls for royal commissions etc. Let’s say there is the potential here for an Australian Inquisition. Whether justified or not there are a significant number of Australians who think that bank profits (from which come the good old dividends) are at obscene levels.

Contrasted against this outlook is that at current prices and based upon current profit and dividend forecasts (which at least partly take into account the softening outlook) the banks appear undervalued. And man those dividends are 8% to 10% grossed for franking credits if the banks can maintain them at current levels. The key word here is if. The risks of course are firstly that, for the reasons mentioned above, future profits and dividends could quite easily be less than what is currently being forecast. The trend is currently going the wrong way. In which case maybe the banks are not undervalued after all. The second risk which is considered less likely but potentially much more significant in impact if it were to occur, is a major collapse in Australian residential property against which the majority of bank lending is secured. Even with increasing capital adequacy ratios banks continue to be quite highly leveraged businesses. Which creates a dilemma between high dividends and reducing risk. Share investing is about both managing risks and generating returns. The answer for investors may be to continue to invest in banks but to not have too higher a proportion of their portfolio invested in the banks.

For some investors (if they are overweight bank shares in their portfolio) this may mean selling some of their bank shares. What was that? Sell some banks? Far out that must be right up there in terms of Australian sharemarket heresies. Put the writer on the rack and call the schoolmaster. Next, we will have the Monty Python crew bursting in. Nobody expects the Spanish Inquisition. However at the end of the day the main aim of the game is to generate returns sufficient to financially fund a lifestyle without taking unnecessary risks that could jeopardise that lifestyle. If the risks are increasing for a significant part of your portfolio why take the risk if it would result in major long term damage to your finances if the risk eventuates in a big way. Now risks are not pre-ordained outcomes. It may be that the risks simply don’t end up happening and reducing banks turns out to be unnecessary. Well if that happens you still have your retirement capital intact.

It should be noted that this blog contains no recommendations it is just providing information. You should seek advice if you are considering buying or selling any of these stocks. If you would like to discuss any of the stocks in this blog or would like a review of your portfolio you are welcome to do so. Contact details are at www.lifestylefstas.com.au

If you are not currently receiving this via my monthly blog and would like to please email me at curtis.taylor@lifestylefstas.com.au